Why is the canal the best way to solve North Beach's Drainage issues?

A canal or ditch with enough capacity, which is open to the bay, enables storm runoff to be absorbed directly into the Bay. The City of Corpus Christi is also in the fortunate position to possess right of way (which used to be a railroad easement) where this canal can be dug. We think that these two factors make a waterway the best solution to the well-known drainage issues on North Beach.


Are there other solutions for drainage?

Yes, but no solution that we've identified will have the same positive economic impacts that the canal solution will.


How much fill material comes from the canal?


If a canal is added to North Beach how will water flow to the ocean?

Much like the canals on Padre Island, if a canal is dug on North Beach, the stormwater which is directed in the canal will be simply absorbed into the bay.

Assuming we don't encounter any political setbacks, the first phase of the canal could be open by the time the new harbor bridge is opening, with phase two coming roughly one year behind it. The Islands may take a longer journey to completion, but we would expect them to show signs of real progress within 2-3 years.

What are the war rooms?

We've been asked why we call our offices in Downtown Corpus Christi, which house all of the information on our projects for the public to see (with an appointment), 'war rooms'. You might say that we're at war with the kind of politics that have held Corpus Christi and the Coastal Bend back for decades.


If North Beach is in a flood zone, can you build structures on North Beach?

Yes, building requirements as of today, without filling lots with dirt, are 14ft elevated on piers or stilt homes. It is possible to fill lots with dirt to elevate above the minimum requirement to build slab on grade. These have to be approved by the city flood plain manager, two projects are underway that use these strategies.


What is the Elevation of North Beach?

North Beach varies in elevation from as low as 0' to 5' on the main peninsula, other areas have been built up over time or due to project requirements.


How many engineers are working on this Project now?

There are 6 engineering firms working on multiple efforts on this project.


How Many people are volunteering their time on the project now?

Dozens of people of all ages, from many areas of the Coastal Bend and elsewhere, of various experience levels and professional expertise are working together for North Beach.


Who is the North Beach Infrastructure Task Force? When was it formed? Who voted for it?


Why does North Beach have such severe drainage issues? 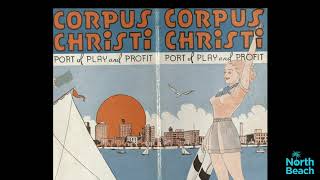 How does this project get paid for?

There are a variety of ways this drainage project could be paid for without a tax increase or general obligation bond. The city manager and city council will make the final decision. There is little question of whether it is a city project, as it is neccesary due to the lack of implementation of drainage solutions and updated utilities over decades.


Is this project going to be completed by private developers?

No. This project fits quite clearly in the public realm, as it effects a large group of property owners (no one but the city has an oversized stake in the issue). It also involves various aspects of public safety.


What is the North Beach Preservation Society and what is its purpose?

The North Beach Preservation Society is a group of citizens from Corpus Christi who formed an organization committed to the furthurance, preservation and knowledge of North Beach's past and belief in its future from an environmental, cultural, and economic perspective.


What part of this project is a city responsibility?

The drainage issue has been a known problem for a long time (a fact even acknolwedged by Mayor McComb) and has adversly affected North Beach for generations. The responsibilty to provide safe and effecient access to properties for taxpayers and first reaponders rests squarly on the shoulders of the city.


This sounds great, why would anyone choose not to support this?

We're not sure, but it would seem that politics would be the only reason not to support a plan that will solve a decades old drainage problem, addresses dangerous public safety issues, be a positive economic impact to the citizens of Corpus Christi and the Coastal Bend area, and will act as a beacon of progress for an even larger audience.


Why should we even care about North Beach?

Aside from being the birthplace of Corpus Christi and our cultural heritage, North Beach also represents one of the greatest potential opportunities for tourism and entertainment development in the City. Located just across the shipping channel from the cental business district/downtown, North Beach is already the destination for nearly 1 million people in it's current state.


What makes this project different from the other ones that Corpus Christi has missed out on?

This project is not only a huge opportunity for the economy, but a solution to the ongoing drainage problem on North Beach. It utilizes both vision and logic, and is ultimately a necessity due to flooding delaying first responder response times.

Learn the facts, send an email or call your council person. No one developer or group owns North Beach, so buy property or be a part of the Future of North Beach!


How do we connect with North Beach?

The North Beach Community Association is a group of property owners on North Beach, chaired by Kim Novak.


How many large development projects on North Beach have been built in the last 30 years?

The new Harbor Bridge, Fajitaville and the La Vista Pointe project is currently under construction.

What is a TIRZ?

A TIRZ is a Tax Increment Reinvestment Zone. A TIRZ is implemented to encourage growth and development in blighted or underserved areas of a city through the reallocation of incremental property tax revenue to projects that benefit the zone in question.


Does a TIRZ raise my taxes?

No. A TIRZ simply takes the property taxes you would have already paid on the increased value of your property in the zone and allocates them to be invested back into the zone.


How long does a TIRZ last?

Every TIRZ is different and designed to jumpstart that specific area. The North Beach TIRZ is proposed to last 20 years.


who decides how TIRZ money is spent?

The TIRZ board, of which is appointed by the entity that creates the TIRZ. Each partnering entity gets representation on the TIRZ Board as well.


Who is on a TIRZ board?

The TIRZ is governed by a board of 5 to 15 people. Each taxing entity which participates in the TIRZ gets one board seat, and the entity creating the TIRZ appoints the remainder.


How many TIRZ are in place in Corpus Christi?


What is a TIRZ for?

A TIRZ, or a Tax Increment Reinvestment Zone, is a very common economic development tool that cities use to incentivize development in areas of a city that are under-developed for any variety of reasons.

Will the islands wash away in the current of the bay?

A study is underway with Lloyd Engineering and Mott McDonald to study the locations, configuration, elevations, and rip rap on the bay side protecting the breakwater islands.


Will the islands stop the effects of hurricanes?

Not entirely. In the event of a storm surge or major flooding event, the islands may help with wave action. A study is underway with Lloyd Engineering and Mott McDonald to study these effects.


Are there other solutions to solve erosion?

The Mott Macdonald study will present 5 different options for coastal breakwater protection. We believe the breakwater islands will be the best solution as well as provide pathways for Federal, State, & local grants along with private wetland mitigation funding.


Is North Beach in a flood zone?

Yes, portions of North Beach are currently in a VE flood zone and a Coastal AE zone. Please see the city flood plans and FEMA Requirements


What are the FEMA flood zones?


The Lexington is in danger of being damaged irreversibly from erosion, what will the islands do to help with this?

With the studies from Lloyd engineering and Mott McDonald, the right placement of the breakwater Islands and breakwater system can reduce the wave action that is causing the erosion around the USS Lexington.


How many islands are there?

There are ten in the current plan. The studies underway by Lloyd Engineering and Mott McDonald may recommend a different number.


Will the public be able to use the islands?